Find the month you were born to learn the history of your birthstone!

Ever wonder "What are the birthstones for each month?" We've got ya!

Did you know that there is a special birthstone associated with every month of the year?  While the exact birthstones have varied over time and cultures, the modern 2020 birthstone list by month came about in 1912 when the American National Association of Jewelers developed a standard list of birthstones for each month. You can learn all you need to know about birthstones and each month's birthstone below! We hope you enjoy these facts, legends, and history behind each birthstone. 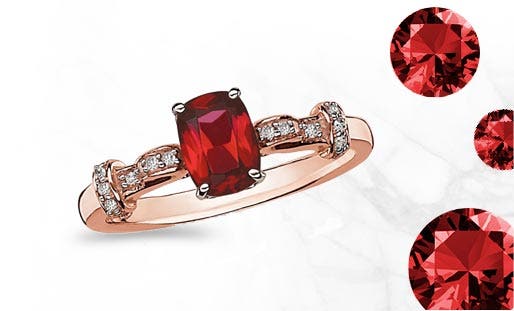 The name “Garnet” is derived from the Latin term garanatus, which means “seed” or “seed like.” Garnet gemstones symbolize loyalty and trust among friends and is considered an appropriate gift to honor friendship. Those with a garnet birthstone are believed to be amicable and possess a strong spirit.
SHOP GARNET JEWELRY 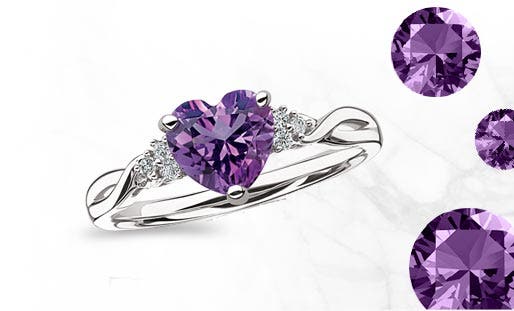 FEBRUARY BIRTHSTONE
Amethyst is a purple quartz whose name is derived from the Greek word meaning intoxication. The ancient Greeks believed that wearing amethyst would prevent them from becoming drunk. Today this beautiful stone is said to bring clarity to emotions, feelings and values to the wearer.

From Cleopatra to Queen Elizabeth, the amethyst has long been referred to as the “jewel of the Gods,” the amethyst is also admired for its religious and political significance. Amethyst symbolizes deep loyalty, love, and happiness, as well as peace & contentedness.
SHOP AMETHYST JEWELRY 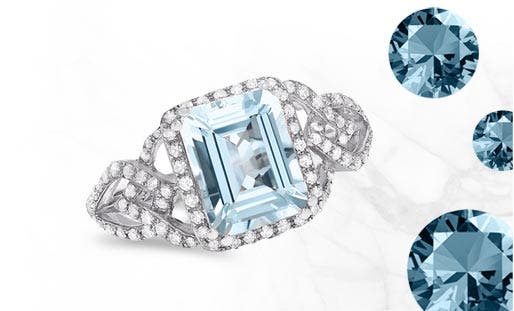 MARCH BIRTHSTONE
Aquamarine is a type of beryl that shines with light and soulful blue hue. A perfect birthstone for March, the Aquamarine creates a beautiful accent to spring and summer wardrobes. Very appropriately, its name comes from the Latin word “aqua,” which means water, and “marina,” which means the sea. It comes in a large variety of sizes, but larger stones tend to have more vibrant colors.

The cool, tranquil aquamarine is said to help wearers remain calm, clear their minds and build courage. It is often used as an aid in meditation and it is not uncommon to give aquamarine jewelry as a wedding anniversary gift too! May we suggest an aquamarine ring?
SHOP AQUAMARINE JEWELRY

The modern birthstone list was established by the National Association of Jewelers in 1912, with a few updates over the years! 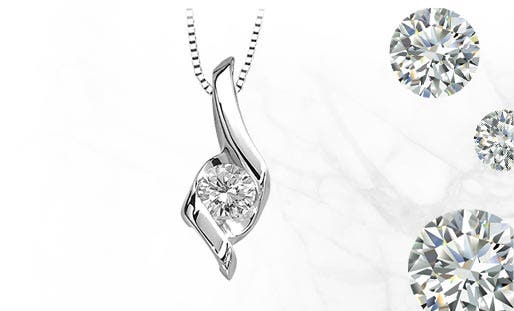 APRIL BIRTHSTONE
Perhaps the most coveted birthstone of all, the diamond is the most durable gemstone found in nature, making it the perfect symbol of long-lasting love and devotion. The name diamond is derived from the Greek word “Adamas” which means invincible.

Diamonds, the birthstone of April, are commonly associated with love which makes it the perfect gift for a loved one. While white diamonds are most common, fancy colored diamonds can be found in various colors including yellow, blue, pink and a variety of others as well. May we suggest a pair of diamond stud earrings?
SHOP DIAMOND JEWELRY 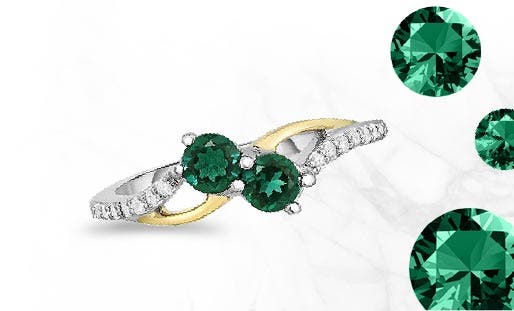 MAY BIRTHSTONE
Emerald, another type of beryl, has a rich and majestic green hue that’s perfect for spring! The emerald is a symbol of rebirth and is said to bring its owner good fortune, foresight, and youth. Emerald, the birthstone of May, carries the rich green color of Spring and radiates a beautiful vivid tone. Just like these emerald necklaces!

Emeralds are the rarest gemstones and are typically mined in Colombia, Brazil, Afghanistan, and Zambia. Places like the fictional Emerald City in The Wizard of Oz helped solidify emeralds in the cultural consciousness.
SHOP EMERALD JEWELRY

JUNE BIRTHSTONES
June is a rare month that has two birthstones associated with it: pearl and alexandrite. Pearls are the only gemstones created by living creatures. Pearls are formed inside mollusks such as oysters & mussels and the process of building a solid pearl can take up to eight years! Pearls signify faithfulness, friendship and loyalty, and in many cultures, purity and innocence.
SHOP PEARL JEWELRY


Alexandrite is known for its rare ability to change colors. Alexandrite appears bluish-green in daylight and purplish red under incandescent light. It was discovered in Russian emerald mines in 1834 and named for future Czar Alexander II. Alexandrite gemstone jewelry is said to promote concentration and learning and is associated with creativity and imagination. 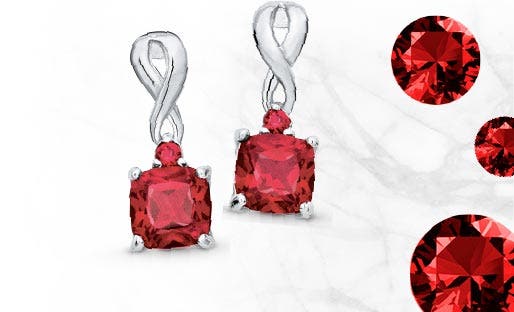 JULY BIRTHSTONE
The deep red colored ruby is one of the most precious and rare of today’s naturally mined gemstones. Rubies have been popular since ancient times, with records showing that the Chinese traded them as early as 200 B.C. Rubies are regarded as symbols of love and passion and are said to increase energy as well as powerful emotions & feelings, much like its powerful color!

As one of the most expensive and prized stones in the world, it comes as little surprise that the ruby is often given for 40th wedding anniversaries. Rubies draw the highest price per carat of all the colored stones.

The iconic red gems are also appropriate as a Valentine’s Day gift, as well as for anyone fortunate enough to call the ruby their birthstone. Rubies are harder than any other stone, except for diamonds.
SHOP RUBY JEWELRY 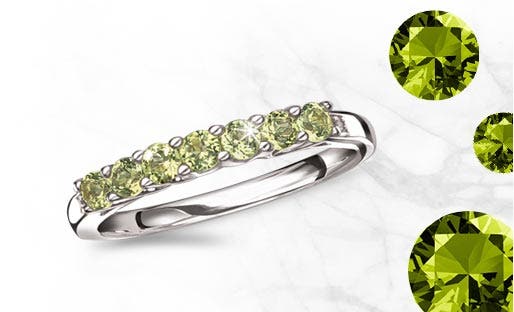 AUGUST BIRTHSTONE
Peridot is a variety of the mineral olivine, which is formed deep within the Earth and brought to the surface by volcanoes. Easily recognized by its olive green hue, the peridot is thought to protect the wearer from nightmares and symbolizes fame, dignity, and success. Known as the “gem of the sun,” peridot has been a prized gemstone for more than 3,500 years.

While the peridot is sometimes overshadowed by the better-known emerald, peridot has its own uplifting energy and beauty that should be seen and appreciated by all.

As the birthstone of August, it's a great gift for those seeking good luck, plus, it is prized in many alternative medicine communities for it's known healing powers.
SHOP PERIDOT JEWELRY

Birthstones are not only fun and nostalgic but throughout our lives, they serve as a beautiful reminder of the month when we were born! 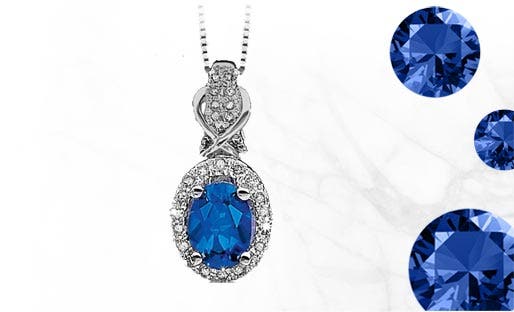 SEPTEMBER BIRTHSTONE
Sapphires are usually thought of as blue gemstones but actually come in nearly all colors (with the exception of red, which is classified as ruby). The sapphire is a symbol of loyalty and integrity. It is also said to protect the wearer from envy or harm and to attract blessings from heaven.

Because of its hardness, sapphire also has industrial uses. The Apple Watch Series 3 features lab-created sapphire crystal in its screen to make it more scratch-resistant, as do several Swiss watch companies. Check out these watches that contain sapphire crystal!

The sapphire is most closely related to the ruby, and as such is second in hardness only to the diamond. It is a popular option for engagement rings and is also traditionally given to celebrate 5th and 45th wedding anniversaries. Have you heard or seen rainbow sapphire jewelry?
SHOP SAPPHIRE JEWELRY 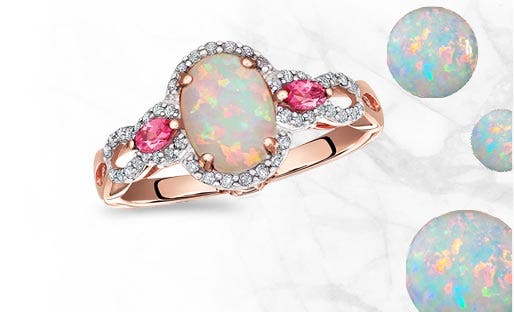 OCTOBER BIRTHSTONE
The word opal comes from the Greek “opallios,” meaning “to see a change of color.” Opals shine with a rainbow of colors because of their unique make-up of light-bending microscopic silica spheres. The majority of the world’s supply of opals comes from Australia. Opals signify hopeful love, faith, and confidence. Opal gemstones are truly unique because each individual gem is adorned with a one-of-a-kind color combination.

In ancient times, the Opal was known as the Queen of Gems because it encompassed the colors of all other gems. Each Opal is truly one-of-a-kind; as unique as our fingerprints. Some prefer the calming flashes of blues and greens; others love the bright reds and yellows.

With its rainbow of colors, as you turn and move the Opal the color plays and shifts, giving you a gem that can be worn with a plethora of ensembles. Check out our most-loved opal necklaces!
SHOP OPAL JEWELRY 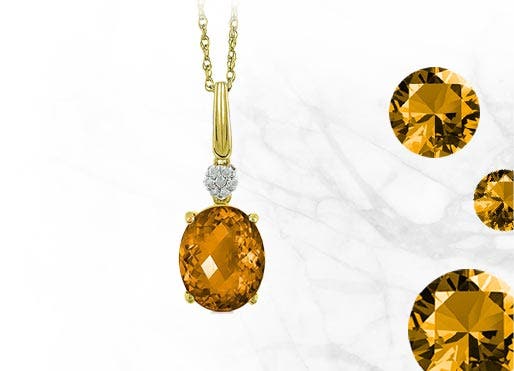 NOVEMBER BIRTHSTONE
Citrine is a variety of quartz with a glowing orange hue. Citrine has been called the “healing quartz” because it provides energy and vitality. Citrine has also been known as the “merchant’s stone” because it is said to attract prosperity and wealth. This bright shining gem has said to be a gift from the sun. The name Citrine, which is French for “lemon”, fits well with its color range of juicy lemon yellow to a bright orangey-brown.

Most people choose a Citrine based on their personal preference, but some of the most sought-after Citrine gemstones have a clear, radiant yellowish to brownish-red color. In ancient times, Citrine was carried as a protection against snake venom and evil thoughts. Today, Citrine is known as the merchant’s stone and is associated with success and prosperity.
SHOP CITRINE JEWELRY 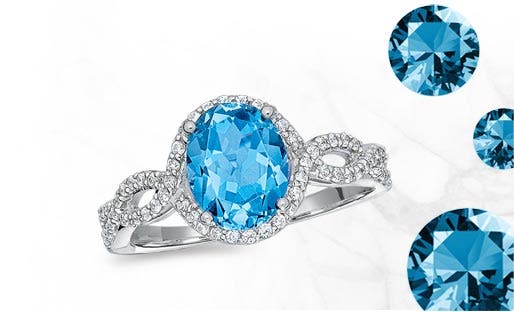 DECEMBER BIRTHSTONE
In addition to being December’s birthstone, blue topaz is the state gemstone of Texas. Its icy blue color is a perfect fit for December’s wintry weather. Blue topaz coloration can range from fairly pale blue to a medium or even somewhat dark sky blue.

Blue topaz jewelry gifts are typically given in celebration of the 4th and 19th anniversaries of marriage because blue topaz is known as a symbol of love & affection. Many believe when wearing blue topaz jewelry it is calming to emotions, brings its wearer peace, joy, generosity & good health.